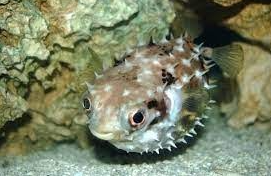 Welcome to Fish Fridays, Friday’s all about fish.

There are about 35,000 species of fish, some of them are bound to be great. So I’m going to talk about them a lot. This is the first edition of Fish Friday, and this week’s fish has been chosen by Jack Chagnon. As a pescetarian that will eat almost any fish you give me, I will be telling you about the pufferfish.

There are over 150 different species of pufferfish alone and they are mostly found in tropical and subtropical waters. They can range from one inch to two feet but can blow up to twice their size by quickly inhaling water and flattening their organs to the side. Though a very interesting skill, the focus of this article is on their much more dangerous defense mechanism.

Fugu, also known as pufferfish meat, is considered a delicacy that is very expensive, and for a good reason. It can only be prepared by licensed chefs who know how to remove the parts of the pufferfish that contain the dangerous neurotoxin Tetrodotoxin (TTX) that mostly resides in the puffer fish’s liver and gonads. Many places that serve the dangerous meal have the chefs taste it themselves before serving. This is when the chefs test for the fish being prepared properly and fully cooked.

People in Japan have been eating fugu for thousands of years and there are many ways it’s served such as fried, smoked, grilled, in soup, and even the spikes of the pufferfish can be used in salad. Raw pufferfish has a chewy texture but has been described as delicate with a softer texture when cooked and tastes like whitefish. It’s subtle clean taste is one of the reasons why it’s said to be good.

If you decided to eat a pufferfish and were unlucky enough to ingest it’s poison, it would not be a pleasant scene.  The toxin would stop your nervous system from doing its job causing your tongue and mouth to start tingling followed by nausea, vomiting and a headache. You will then have difficulty that will get worse until you lose the ability to breath on your own entirely. Before the need for a ventilator you’ll start to lose most functions such as digestion, motor functions and a steady heart rate. This will continue until you are fully paralyzed and then inevitably die from respiratory failure because there is no antidote. Your only chance of survival is early treatment.

Despite reading about the horrors of what would happen if you were to consume a pufferfish not prepared properly, I am willing to stay loyal to my role as a pescatarian who will eat any fish. The question is: is it worth it?