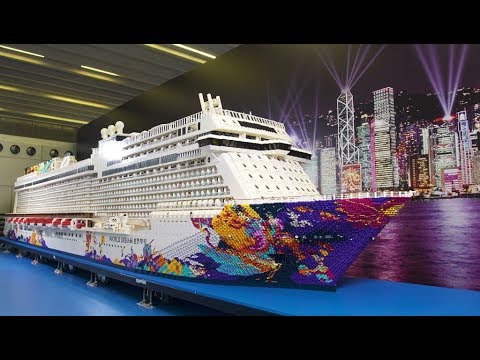 With a bucket of Legos, you can tell any story. You can build an airplane or a dragon or a pirate ship – it’s whatever you can imagine.   ―Christopher Miller(writer for The Lego Movie)

On Thursday, once a month, you can let your imagination run unchecked and show off your creativity at Windsor High School’s new Lego Club.  Run by Mr. Frank Scott in room B101, it’s a place where you can share your passion of building and creating with Legos. If you’re interested check out one of their flyers posted around the WHS community. The club is open to anyone, so feel free to take a look whenever a meeting is held.

In the Lego Club, members are given the freedom to build whatever they want with Legos–-maybe not to the extent of the Lego ship above, which holds the record for the largest Lego ship in the world, made using 2.5 million Legos, weighing over 6,000 pounds, and measuring about 28 feet—but almost anything, since an exceptional number of Legos have been donated to the club from the Windsor community. Finally, besides building Legos, members are able to play would-you-rather games, take fun quizzes, and more.

Mr. Scott is the advisor of the Lego Club and has been building Legos since his childhood. He enjoys advising the club and does a great job. According to Mr. Scott, “The club is really about people getting together, having conversations, and building creations. Just wanting kids with common interests to get together and have a space to do it.” Mr. Scott, who has a great fondness of Legos, added “My history with Legos is pretty simple, and when the opportunity came to facilitate other kid’s interest in Legos, I jumped on it.”

By next year Mr. Scott and the rest of the club aim to have more frequent meetings. Instead of meeting once a month, a meeting could be held once a week. Another goal is for their Lego creations to be displayed in the library. The club is working hard toward these goals, and with more members the club can achieve these goals faster.

If you find yourself interested in the club, come check it out any time a meeting is held, right in room B101, once a month on Thursday. You can also ask Mr. Scott about the club. Give it a try. You might just find a passion for Legos.